Why is the universe dominated by matter, and not antimatter? Neutrinos, with their changing flavors and tiny masses, could provide an answer. If the neutrino is its own antiparticle, it would reveal the origin of the neutrino’s mass, demonstrate that lepton number is not a conserved symmetry of nature, and provide a path to create the matter-filled universe we see. To discover whether this is the case, we must search for neutrinoless double-beta decay. 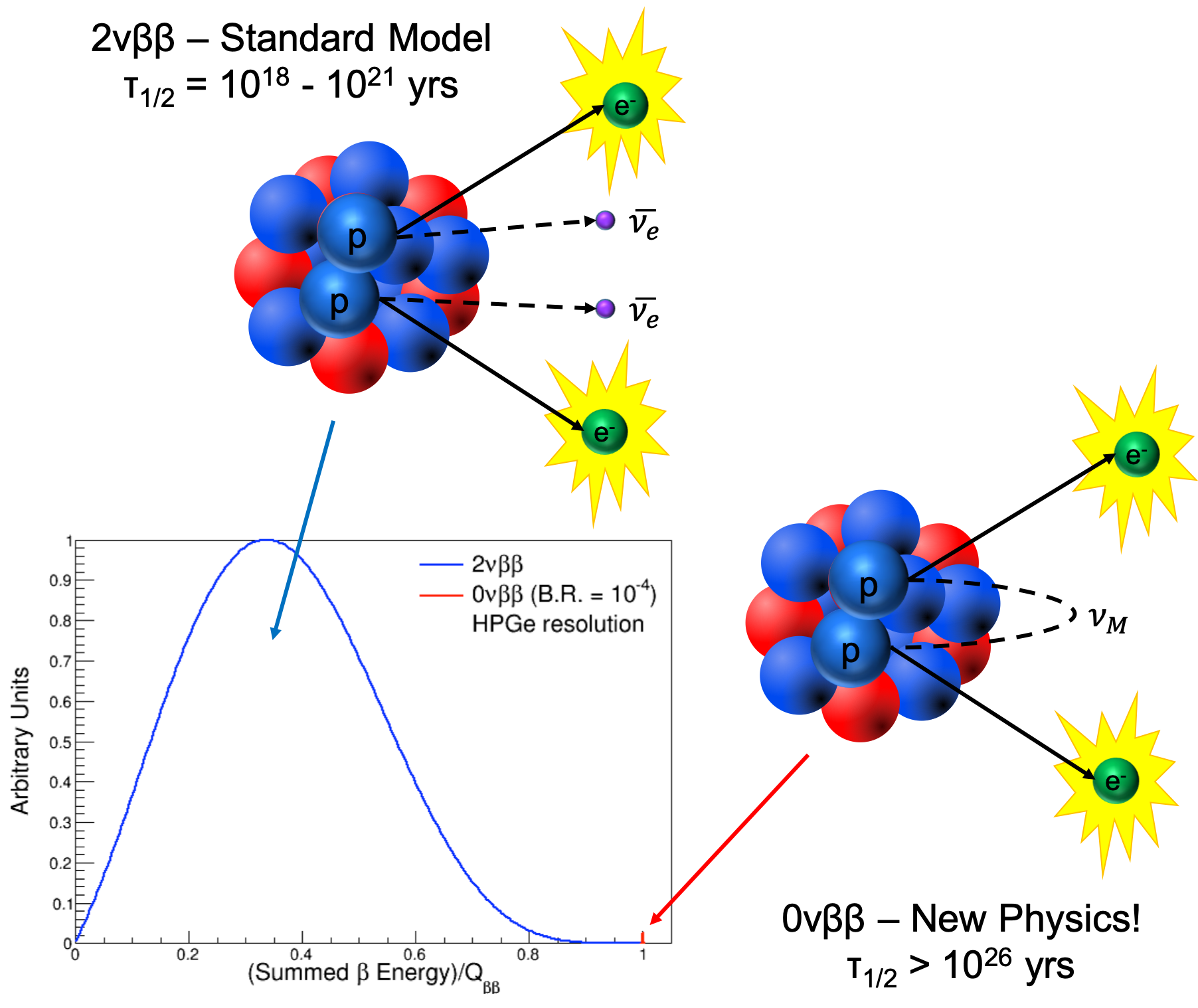 Certain isotopes can undergo two neutrino double-beta decay (2νββ),  as first proposed by Maria Goeppert-Mayer in 1935. In this Standard Model process, two neutrons within the nucleus transform into two protons, emitting two electrons and two electron antineutrinos. Even this process is extremely rare; it took physicists 50 years to finally detect it! When 2νββ occurs, we only detect the electrons emitted from the nucleus. The anti-neutrinos escape, carrying away some energy. Therefore, the process has a broad energy signature in our detectors, with energy anywhere from 0 to just below the Q value of the decay (the mass difference between the initial and final states).

If the neutrino is Majorana, meaning that it is its own antiparticle, an even rarer process could occur: the two anti-neutrinos could annihilate inside the nucleus instead of being emitted, leading to neutrinoless double-beta decay (0νββ). In this case, all of the energy of the decay would go into the electrons, with none of the energy escaping our detectors. Therefore, the signature would be a sharp peak in energy at the Q value. 0νββ experiments search for this sharp peak, while trying to eliminate backgrounds from all other sources of radioactivity.

If 0νββ occurs, it would make two new particles without making any antiparticles! The Majorana nature of the neutrinos could also explain their small but non-zero masses. Most excitingly, Majorana neutrinos could provide a pathway to making a matter/anti-matter imbalance in the early universe that survives to this day, giving us a world full of “stuff.”

Sabrina Cheng (MIT), an undergraduate student who worked with our group, made this intro video explaining neutrinoless double-beta decay and the Majorana Demonstrator: