The Gruszko lab focuses on the search for neutrinoless double-beta decay (0νββ), and on how understanding the physics of detectors can put extremeley rare processes within the reach of our experiments.

The Gruszko lab is a major contributor to three experimental efforts: the MAJORANA DEMONSTRATOR, LEGEND, and NuDot.

To have the potential to discover 0νββ, experiments must have large masses of the source isotope, low radioactive backgrounds, and  high efficiency. Having a good energy resolution helps reduce backgrounds and maximize discovery potential. Techniques that allow you to distinguish between the surfaces and bulk of the detector or tell apart types of particle interactions (e.g. single vs. multiple scatter events, or γ and α interactions vs. β interactions), help to further reduce backgrounds. 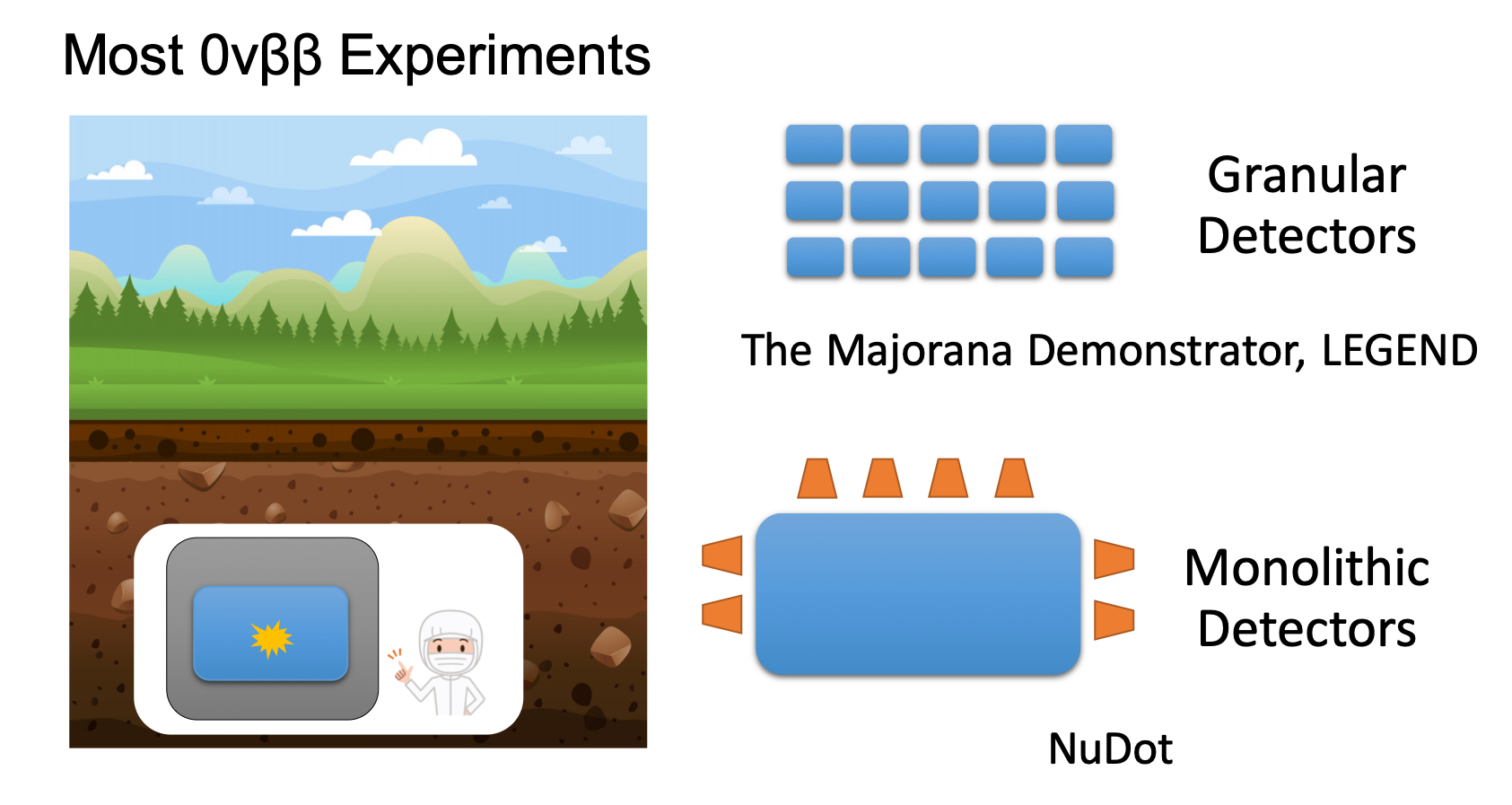 To reduce the impact of cosmic rays, most experiments operate deep underground. They are assembled in cleanrooms to reduce radioactive backgrounds, and use shielding around the detector to reduce γ backgrounds from the environment. Most experiments make the detector medium out of the double-beta decay isotope, maximizing their efficiency. There are two broad categories of experiments: granular experiments use many small detectors, closely packed together, and monolithic experiments use one large volume of detector medium, which must be instrumented around its edges. Each approach has its advantages and disadvantages.

With recent advances in computation, machine learning is becoming a powerful tool for analysis in fundamental physics experiments like 0νββ searches. Our group is developing a variety of techniques, from supervised learning approaches that build on traditional analysis methods, to unsupervised data-cleaning networks for real-time operation of low-background experiments, and networks that integrate information from data and simulations in novel machine learning architectures.

The Majorana Demonstrator is a collaborative project involving about 20 institutions in four countries and about 50 scientists to search for 0νββ. The discovery of 0νββ would imply that the neutrino has the unique property of being its own antiparticle. The Demonstrator’s construction was completed in 2016, and it is currently taking data on the 4850′ level in the Sanford Underground Research Facility (SURF) in Lead, SD.

The Demonstrator consists of 44 kg of HPGe detectors. Of these, 30 kg are enriched to 88% in the double-beta decaying isotope 76Ge. 76Ge is a  good candidate because one can build detectors directly from the enriched germanium, making the detector and source the same. This greatly simplifies the design and reduces backgrounds. Germanium detectors also have better energy resolution than any proposed or existing 0νββ experiment, which is critical for background reduction and increased sensitivity. The Demonstrator‘s main scientific goal is to search for 0νββ, but it also has an important technical goal of demonstrating a background low enough to justify building a ton-scale germanium experiment. The group at UNC is the lead institution for the Demonstrator and is contributing to data acquisition and analysis, simulations, low-background assay, dark matter searches, and engineering.

The Gruszko group is particularly focused on studying the physics of α interactions, a major component of backgrounds in the 0νββ region of interest.

The LEGEND Collaboration aims to develop a phased, 76Ge based double-beta decay experimental program with discovery potential at a half-life beyond 1028 years, using existing resources as appropriate to expedite physics results. In unites the best technologies developed by the Majorana and GERDA experiments.

LEGEND-200, the first stage of the experiment, is already under construction. It will have 200kg of enriched material running in the modified existing infrasctructure at Gran Sasso National Laboratory (LNGS), in Italy. It is planned to start taking data by the end of 2021.

LEGEND-1000 will have 1000kg of enriched material, which will be staged via individual payloads. Its timeline is connected to the review process, but research and development work for the experiment is already underway.

The Gruszko group has taken on a major role in characterizing the new detectors that will be used in LEGEND-200, and particularly on characterizing their response to surface events like α and β interactions. We are also involved in improving pulse-shape simulations of the detectors by incorporating surface effects.

The Gruszko group is a major contributor to the design and planning of LEGEND-1000; pulse shape simulations are a key component of that work. We are also working to explore the potential science reach of LEGEND-1000 for other rare processes, like the detection of supernova neutrinos.

Large liquid scintillators are one of the only feasible technologies if we need to scale 0νββ experiments to masses larger than 1 ton. As we move to these kiloton-scale experiments, however, we encounter new background risks that scale with the volume of the detector, like scattering of solar neutrinos.

One way to reject these background events is to count the number of charged particle tracks — neutrinoless double-beta decay features two electrons, and these background events have just one outgoing electron. In liquid scintillator the electrons move faster than the speed of light, emitting directional “shockwaves” of Cherenkov light along their direction of travel. Using fast-timing photomultiplier tubes, we can distinguish this light from the far-more-abundant and isotropic scintillation light. NuDot is a 1/2-ton proof-of-concept liquid scintillator experiment that is testing this and some of the other techniques we’ll need to build kiloton-scale detectors that aren’t limited by backgrounds. Other work on NuDot focuses on the development of new fast-timing photodetectors and data acquisition systems, testing quantum dots as wavelength shifters and as a means to load the double-beta decay isotope, and on developing machine learning algorithms for event recognition.

The Gruszko group leads NuDot, which will be housed at Triangle Universities Nuclear Laboratory (TUNL) starting in 2020.

Dr. Gruszko presented on her work with NuDot at the 17th Annual Pappalardo Fellowships Symposium:

Summer Undergraduate Researcher Junior Peña’s work on NuDot was highlighted in this video about the 2019 MIT Summer Research Program (MSRP):